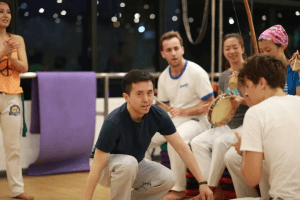 This time we are featuring one of our oldest Capoeira Mandinga Shanghai students and a great singer: Charlie Brown.In this episode he shares his vision about capoeira, family, life at work and how he managed to find a healthy balance between the three. Enjoy the reading! 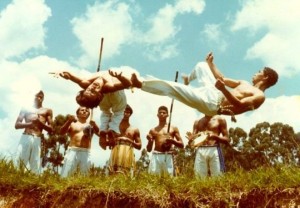 Capoeira is a Brazilian martial art: it is about dancing, is about music and finally it is about communicating.  There is no need to be sporty, flexible or whatever. Anyone can try, the only thing you need to do Capoeira is the urge and the desire to play!

Continue ReadingWhy you should try Capoeira (by Virtual)

The elderly who exercised or gathered at the Temple of Heaven were captivated by two foreign men who one day appeared and performed some kind of street dance. The old people were curious about the movements. Later, they were taught to play strange musical instruments to accompany the dance.

This was a scene that appeared in a program produced by SexyBeijing.tv, an Internet TV station that focuses on Beijing life. Jamel Mims and Leroy Philpotts were the men on the show, doing Capoeira, an Afro-Brazilian dance form that incorporates self-defense maneuvers and is now finding a following in Beijing. END_OF_DOCUMENT_TOKEN_TO_BE_REPLACED